Some years back, I was in exactly this position. In my quest to deploy apps that I'd developed locally with Docker Compose, I’d read the documentation along with countless blog posts, yet was left more frustrated than anything else.

So, I decided to sit down and figure out the simplest approach to deploying apps with Docker Compose and then to document my findings. This free book and course are the result of what I learned. 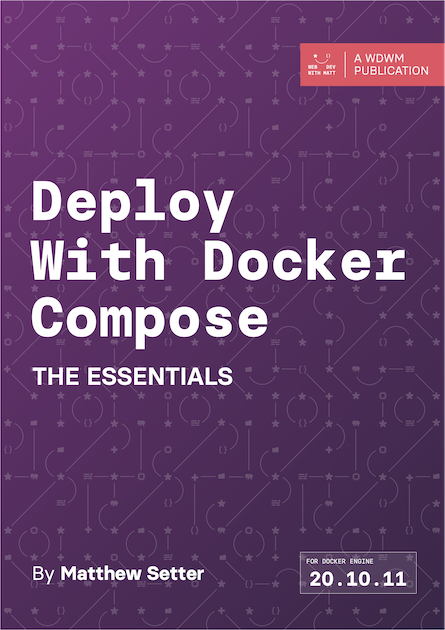 Why Get The Book and Course?

I can think of a number of reasons to get the book, but here are some of the best:

But more specifically, here’s why you should get the book and course because you want:

Before you dive into creating a local development environment using Docker Compose, you'll learn some essential terminology that you need to be aware of, terms such as Image, Container, and Registry.

How to Install Docker Compose

Now that you know some of the key terminology, it's time to install Docker Compose and the related tools that you'll need to follow along with the book and course. In this chapter, you'll learn how to do that on the three major operating systems: Linux, macOS, and Microsoft Windows.

How to Build a Local Development Environment using Docker Compose

In this chapter, you're going to get your hands dirty with Docker Compose by learning how to build a development environment which serves as the basis for production (or any other environment).

You're going to learn the essentials of Dockerfiles and Docker Compose files (docker-compose.yml) to build a 3-service configuration that can run an application on your local development machine. On top of that, you're going to learn the essential Docker and Docker Compose commands for starting and stopping containers and testing that they're running properly.

Now that you've learned how to create a basic setup with Docker Compose, you're going to learn how to do basic container debugging. If things go wrong, you need to know how to figure out what’s going wrong and why.

With that knowledge, you can either fix the problem or ask someone for help if you’re unable to fix it on your own. So in this chapter, you're going to learn the docker commands to debug containers.

Docker and Docker Compose make it pretty trivial to build local development environments. But what about running tests and debugging applications running inside containers, versus on your local development machine?

How do you run unit, functional, acceptance, and other types of tests when the code and runtime are inside Docker containers, not on your local machine? How do you do step-through debugging?

In the final chapter of the book, you'll learn how to build Dockerfiles and Docker Compose files to deploy applications to a remote environment. You'll also learn some of the things that you need to consider when deploying containers to remote environments, versus on your local development machine.

You’ll also learn about building, tagging, and pushing Docker images to image registries, and how to create Docker contexts so that you can work with multiple remote Docker daemons. It won't make you a DevOps guru or Systems Administrator — but you'll be that much less reliant on them!

Why are the Book and Course Free?

It might seem a little too good to be true, that a professional book and course on Docker are free. But, I can assure you that they both are, and that there is nothing shady going on. The book and course are free for several reasons:

While I've spent over 200 hours on Deploy With Docker Compose so far, enough people enjoy my teaching style and continue learning with one of my books or premium courses. So, it all works out for all of us in the end! That said, you can support the project, if you'd like; I'd be very grateful if you do.

I regularly share what I know and am continuing to learn about PHP and web development more broadly on my site: Web Dev with Matt. I was the co-host of The Undercover elePHPant, a podcast about scaling and optimizing PHP applications. I'm also the author of Mezzio Essentials, Zend Framework 2 Foundations, Mezzio: Getting Started, Zend Db Deep Dive, and Zend Framework 2: The Basics.

Want to Listen to the Deploy with Docker Compose Talk?

If you're not sure if the book is for you, come and listen to me give a talk, based on the book, and see what you think. The talk's titled "Deploying PHP Apps with Docker Compose - The Essentials". Yes, it does have an emphasis on PHP, but that's because most of my experience is with PHP. The approach that the book and talk cover can be applied regardless of the language that your application is developed with.

Want Me to Give the Talk at Your User Group?

DM me on Twitter or email me and let's work out a date.